Michael Burry, the famous investor behind “The Big Short” warned of rising inflation and a huge market bubble.

Back in October 2021 Burry also commented on the misinformation and persecution of conservatives that is permeating the current culture.

Back in October 2021 Michael Burry tweeted this out. 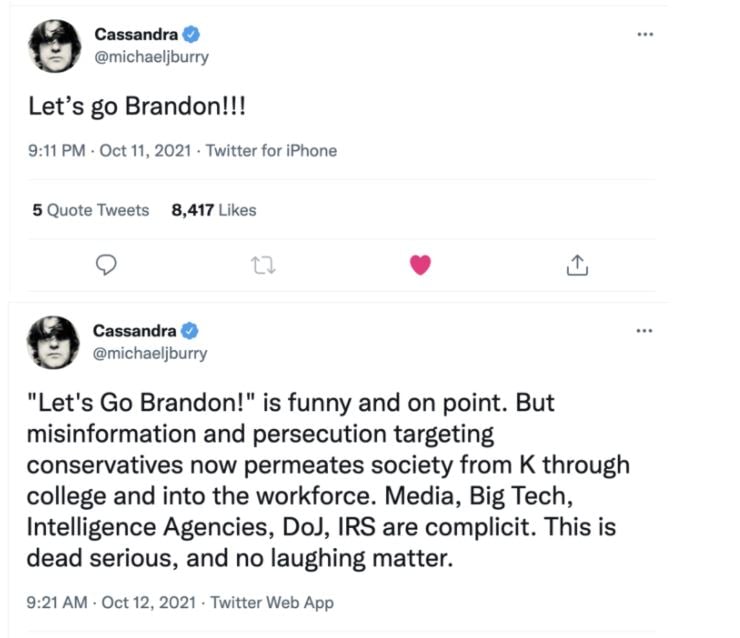 On Monday investor Michael Burry warned of a “real” multi-year recession for the U.S.

In a now-deleted tweet, Burry told his followers: “What strategy will pull us out of this real recession? What forces would pull us so? There are none. So we are really looking at an extended multi-year recession. Who is predicting this? There are none.” After two consecutive quarters of contraction, the U.S. economy picked up in Q3. The second estimate released Wednesday morning showed that the U.S. GDP rose 2.9% versus markets’ expectations of a 2.7% increase. This comes after two negative readings of -1.6% and -0.6% in Q1 and Q2, respectively.

But with the Federal Reserve raising rates by 350 basis points year-to-date, the U.S. economy is bound to slow. And Burry’s outlook is far from optimistic. Markets are also looking for another 50 basis-point increase at the December FOMC meeting.

In the short term, investors are focused on the U.S. jobs report from October, which will be released this Friday. The idea is to gauge how aggressive the Federal Reserve will have to be into the year-end.

Earlier this month, Burry highlighted gold in a rare comment, stating that this is the time for the precious metal to rally, citing the crypto contagion risk post-FTX collapse.

“Long thought that the time for gold would be when crypto scandals merge into contagion,” Burry said in a tweet that has since also been deleted. Burry is known to delete his tweets shortly after posting them.

Since the 2022 elections several companies have announced massive layoffs including Twitter, HP, Amazon, CNN, Kavak and others.