Please use Chrome browser for a more accessible video player

British No 1 Cam Norrie lost 6-4 6-4 in the final of the Mexican Open to Rafael Nadal as the Spaniard claimed his fourth title in Acapulco.

Nadal, who first won the title in 2005 and took it again in 2013 and 2020, stormed through the Acapulco draw without dropping a set, to claim his third straight title of 2022.

The Spaniard has won 15 straight matches since returning from a foot issue that sidelined him for nearly six months last year.

He looked in fine form as he fended off a determined Norrie to wrap up the win in an hour 54 minutes.

“It always has been a very special place,” Nadal said of the host city. “The energy that the people from Mexico bring to me is very unique.”

Norrie, fresh from triumphing over world No 4 Stefanos Tsitsipas, was the first to drop his serve as Nadal pulled away 3-2 in the opener before claiming the set.

Norrie was broken in the opening game of the next set before he hit back to be a 1-1, but the world No 5 broke him again in the fifth game to go ahead 3-2.

Nadal broke Norrie a third time to take a 5-2 lead, yet the younger man rallied to pull a break back before running out of energy to eventually fall.

“I went through some very difficult moments during the match that I was able to save, and then I took advantage when I had the chances,” said Nadal, who is both the youngest and oldest champion at the event.

“I’m very pleased. It was a very important title for me, so I can’t be happier.” 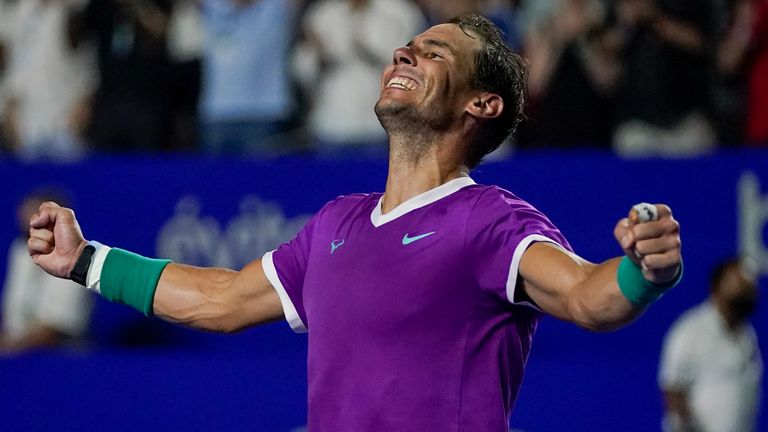 There were doubts he would ever play again (after his foot injury) and to the fact that he’s back playing and to the level he is is nothing short of remarkable. Winning the Australian Open was one of his greatest achievements. The question for Nadal now is to just be smart in his schedule and I don’t think he needs to overplay. He wants to win the French Open.

Nadal’s four titles have him equal with David Ferrer and Thomas Muster as the most successful male players at Acapulco.

“I’ve said consistently I’m not sure there is anyone fitter or stronger at the moment in the men’s game. He looks just so confident and at ease with his tennis. He’s playing Top 10 tennis.

“To the eye, it doesn’t look as if he has anything spectacular, but when you watch him a lot and you see how he’s winning his matches you realise why he is such a good player.

“There aren’t too many that are fitter than him and then you have the huge contrast of his shots. He’s got a backhand which is as flat as we have seen on tour, so that stays low. And then you’ve got the forehand which has improved a lot. Especially the one where he hits down the line with plenty of top spin and he’s left-handed.

“All he needs now is as long as he doesn’t play Nadal in the third round of a major, but if Cam can get to the tick off the last 16 and the quarter-finals of a Grand Slam I don’t see why he can’t do that at the French, at Wimbledon and at the US Open.”

Andrey Rublev won his 10th ATP Tour title with victory over Jiri Vesely in the final of the Dubai Duty Free Tennis Championships.

The Russian, 24, ended Czech Vesely’s fine run in the desert with a dominant 6-3 6-4 win on Saturday.

World No 123 Vesely, who knocked out Novak Djokovic in the quarter-finals, was bidding to become the first qualifier to win the Dubai title.

Rublev is now set to rise to sixth in the world rankings, having now won his last nine singles matches after he also won the title in Marseille last week.

“I want to show my support to all the people who are suffering in Ukraine,” an emotional Swiatek, on the verge of tears, said on court following her victory.

“Seeing those images is really emotional for me. I wouldn’t even imagine stuff like that happening in the country next to me. I hope everybody will be safe in the end.”

It is the fourth WTA singles title of the 2020 French Open champion’s career and her second 1000-level crown.