Eight years after Russian troops seized Ukraine's southern region of Crimea, the event is being celebrated with flag-waving crowds in Moscow's Luzhniki stadium and special lessons in schools.

President Vladimir Putin made a special appearance before the crowd.

State workers said they had been told to take part. In schools, teachers held lessons marking the "Crimean spring".

The Russian army has used its bases in Crimea to seize towns and cities on Ukraine's south coast.

Mr Putin has regularly used the anniversary to highlight love of the motherland.

Officials said more than 200,000 people had gathered at the stadium, although the numbers could not be verified. The stadium's official capacity is 81,000, but there were also large crowds outside.

President Putin praised the military, who he said had demonstrated Russian unity: "When needed, they shield each other from bullets with their bodies like brothers. Such unity we have not had for a long time." He also repeated the false claim that Russian troops were protecting people in areas of eastern Ukraine from genocide. 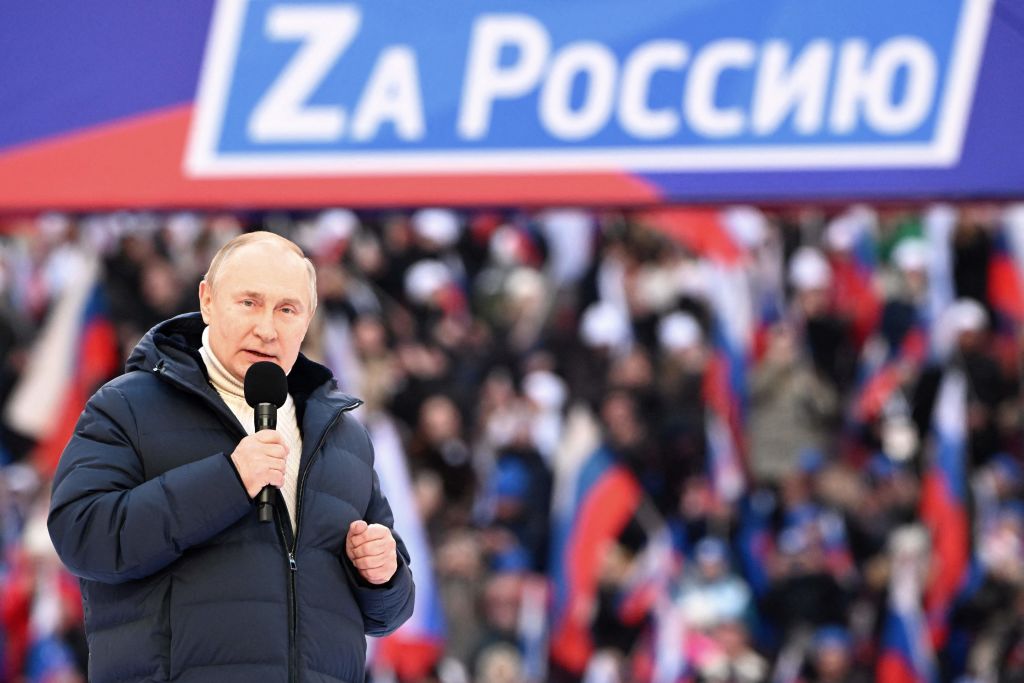 We know what we need to do next, how to do it and at what cost. And we will definitely carry out all the plans we have made

But as he spoke on stage, his address on almost every major state TV channel suddenly cut to singer Oleg Gazmanov belting out the words "Forward, Russia", in what the Kremlin later called a technical glitch.

By Will Vernon, BBC News Moscow

I spoke to dozens of people queueing to enter the venue for the pro-Kremlin rally.

Many told the BBC they worked in the public sector, and that they had been pressured into attending by their employers.

One man who works in the Moscow metro, told us that he and other employees had been forced to attend the rally.

"I'll be here for a while and then I'll leave… I think most people here don't support the war. I don't," he said.

Many people didn't want to be filmed or answer questions.

Students told us they had been given the option of a day off from lectures if they attended "a concert". Some of the students we spoke to didn't even know that the event was dedicated, in part, to support the war in Ukraine.

There were doubtless some people in attendance who genuinely support President Putin and the "special military operation in Ukraine", as the Kremlin prefers to call it.

Special lessons on the war entitled "My Country" began at the start of March, for students in the final six years of school. Pupils were played a video of Mr Putin from 21 February, in which he detailed his vision of Ukraine's history, BBC Russian reports.

Photographs emerged earlier this week of children lining up to form the letter Z, a symbol painted on Russian military vehicles that have invaded Ukraine.

The education ministry then sent out lesson plans specifically geared to 18 March, the date that Russia annexed Crimea after an internationally discredited referendum.

According to a memo sent to schools by the education ministry, lessons for children in Years 6-8 (12-15 year-olds) should focus on "heroes of our time... to help form a stable and grounded understanding of the feeling of patriotism".

Pupils were to be asked to sit in a circle to hear an explanation of how ideas of "duty, dignity and patriotism are inextricably linked with the concepts of exploits and heroism". Teachers would then show a video to show that people with military roles were more likely to become heroes than anyone else.

A separate video was sent out to schools giving Russia's version of the events surrounding the annexation of Crimea.

In the video, two uniformed teenagers from Crimea are asked if they know what happened on 18 March 2014. One says that for him, as a resident of Sevastopol in Crimea, it was a day of celebration, when the "Crimean Spring" was accomplished.

Another teenager, Anna, is asked why the events are known as spring: "Spring is the start of new life. It is renewal, warmth, the sun. And of course, a cosy home."

One teacher in Moscow region spoke of taking the day off out of disgust.

"I don't like history being used for propaganda. I think this is dangerous, because there are a lot of children here who have relatives in Ukraine. This can provoke conflicts among children," said the teacher, who prefers to remain anonymous.

Most of her colleagues said they were in favour of the lessons. "Even those with relatives under the bombs approve. They say the Nazis should have been kicked out a long time ago," the teacher said, referring to Russia's false characterisation of Ukraine's leadership.

A number of teachers have complained about the "My Country" lessons. One teacher from Volgograd called Svetlana said that for some of the children war was something of an adventure. "I explained there's nothing good in war," she told BBC Russian.