"I don't want to be a reflection of state propaganda," he wrote on the social media site, just a few days before it was restricted in Russia. "I have my own opinion! Lots of teachers do. And you know what? It's not the same as the opinion of the state."

He felt compelled to write the comment after a staff meeting at his secondary school in central Moscow, in which he and his colleagues were told how to talk to their pupils about the situation in Ukraine - not to deviate from the government position.

Two hours after posting, he received a call from the school's headteacher telling him to delete it immediately, or leave his job.

"I didn't want to delete it," Mr Manafly told the BBC. "I knew straight away there was no point in arguing, so I thought it was best to just resign."

When he arrived at school the next day, expecting to pick up his things and sign his resignation letter, he was barred from entering the premises.

"They said they have an order not to let me in. The children started to come out on to the street to support me, say goodbye and so on. Then someone called the police and said I was organising an unsanctioned rally."

He eventually recovered his belongings, and the next day he was able to meet the school's headteacher, where he was asked for a formal explanation about why he had expressed his political views on social media. Mr Manafly refused, expecting to resign anyway, but instead was told that the situation had changed, and he was going to be dismissed.

"Two days later, I was informed that I had been fired for immoral behaviour at work," Mr Manafly said. "For me, the strangest thing is that they consider the expression of a personal opinion to be 'immoral'."

The school's headteacher did not respond to a request for comment, but in WhatsApp messages seen by the BBC, parents at the school were informed that Mr Manafly's posts on social media had broken his working agreement with his employers, which he denies.

After Russia invaded Ukraine on 24 February, many thousands of Russians, particularly in Moscow and St Petersburg, expressed their opposition to the so-called "special military operation", signing petitions, posting on social media, or joining anti-war street protests. The state's response has been heavy-handed, detaining thousands of protesters and introducing a new law which made spreading "fake" information about the Russian military punishable by up to 15 years in jail.

Still, Mr Manafly's Instagram post did not fall foul of that law, according to Russian newspaper Novaya Gazeta, which felt able to publish it in full even after the new regulations came into force. 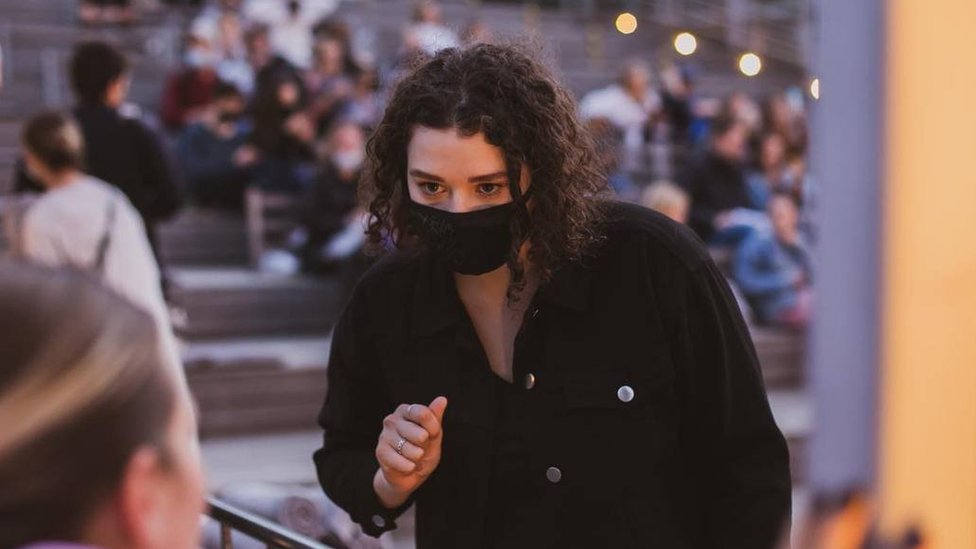 I loved my job, I enjoyed it. I didn't want to lose it

Despite the increased risk, for Katya Dolinina, the invasion of Ukraine was the moment she could stay quiet no longer. A manager of two cinemas at the state-affiliated Moskino cinema chain, Ms Dolinina had tended to keep her political views to herself.

"I loved my job, I enjoyed it. I didn't want to lose it," she told the BBC, explaining why she had not taken part in previous protests against the government.

But when the war started, that changed. When friends sent her an open letter against the so-called "special operation", signed by people working in the cultural sector, she didn't hesitate to add her name.

"I agreed with the opinion that these operations should be stopped immediately, that this was not ok," she said.

Soon after signing the letter, Ms Dolinina received a call from her boss. She should remove her name immediately, or resign. If she refused to do either, she would be fired, she was told. Moskino did not respond to the BBC's request for comment.

"I felt like it doesn't matter any more. I don't know how I would work anyway if they didn't ask me to resign. After this special operation started I don't feel any motivation to do anything that's not connected to it," she said.

She resigned without a fuss, she said, because she was worried that her employers would otherwise find a pretext to fire her, which would cause her more problems in the future.

The whole process of ending her employment took just a couple of hours, and the atmosphere at her final meeting with her managers was cordial - they told Ms Dolinina they were sad to see her go, although she now wonders if that was just an attempt to avoid conflict.

But for Anna Levadnaya, a paediatrician and influencer with over two million followers on Instagram, the meeting in which she found out she must resign was far from friendly.

She was on holiday abroad when the invasion of Ukraine began. That day, she posted a photograph on Instagram of an aeroplane window, with an image of a peace dove attached.

"I didn't choose aggression," she wrote. "I am frightened for us all." She described her family's Ukrainian roots, and called for "this hell" to end as soon as possible.

With such a huge following on Instagram, the post was unlikely to go unnoticed by her employer, a major state-run medical centre in Moscow.

Several days later, Ms Levadnaya, still abroad, heard from colleagues that the director of the medical centre had lambasted her anti-war comments during the morning conference in front of more than 100 of her colleagues. She received a video recording of the event.

"It was a public shaming," Ms Levadnaya told the BBC. "They made it clear that someone who doesn't support the aims of the government should not be working at a state-run institution."

The director gave a speech, several minutes long, explaining that if Ms Levadnaya had been better informed about world events, she would support the "special operation". Soon after, she was instructed to write a letter of resignation, and if she refused she would be fired.

Her letter consisted of a single sentence, explaining simply that it would be "impossible to continue her work".

In her social media posts, Ms Levadnaya explains current medical issues in an engaging way that makes sense to her audience. She has learned to live with internet trolls and angry comments, she said, but the invasion of Ukraine has taken it to a different level.

"Even Covid vaccines, which created so much aggression, didn't cause as much hatred between people as this war. There's this huge split in society now, because everyone only believes their own truth."

Many who find themselves on the opposite side of that split to the Russian state have had their lives turned upside down by the war in Ukraine. Some have lost their jobs, others have resigned in protest. Family ties have become strained, often along generational lines.

For Kamran Manafly and many thousands of others, the only option was to leave the country. But not everyone can, or wants, to take that step.

"Not every Russian who disagrees with Kremlin propaganda can leave this country", Katya Dolinina said. "We are still here. We still have hope. We try not to give up."