The burnt-up wreckage of a Russian tank lies in the dirt, while in an accompanying photo next to it, a Ukrainian soldier carries the armaments said to have caused the destruction.

The images posted to Twitter by the Ukrainian Armed Forces are labelled with a triumphant caption, declaring that this was the result of "hits from Javelins on [Russian] military equipment".

The Javelin, a shoulder-held anti-tank weapon that shoots heat-seeking rockets hurtling towards targets up to 4km (2.5 miles) away, can be controlled by a portable unit that doesn't look much different from a video game console - but can send a metre-long projectile straight through the side or top of an armoured tank.

The very presence of the American-made weapons "causes panic" among Russian troops, the Ukrainian military claims - and it is about to get 2,000 more of them.

Javelin missiles are among the items promised to Ukraine by the US in a new $800m (£608.3m) military assistance package announced by President Joe Biden on Wednesday.

Other armaments include drones that can be turned into flying bombs and anti-aircraft weapons that can shoot helicopters from the sky.

What will the US send to Ukraine?

The new US aid for Ukraine includes a wide range of military equipment, ranging from 25,000 sets each of body armour and helmets to rifles and grenade launchers, thousands of other anti-tank weapons and more than 20m rounds of ammunition.

Besides Javelin missiles, the most powerful weapons include 800 Stinger anti-aircraft systems, once famously used to shoot down Soviet planes in Afghanistan.

The US also plans to ship 100 "tactical unmanned aerial systems" - small drones - which are often hand-launched and small enough to fit into rucksacks.

Soldiers can use them to scope out the battlefield or, in some cases, to attack, essentially creating flying bombs that can be flown into targets from a distance. 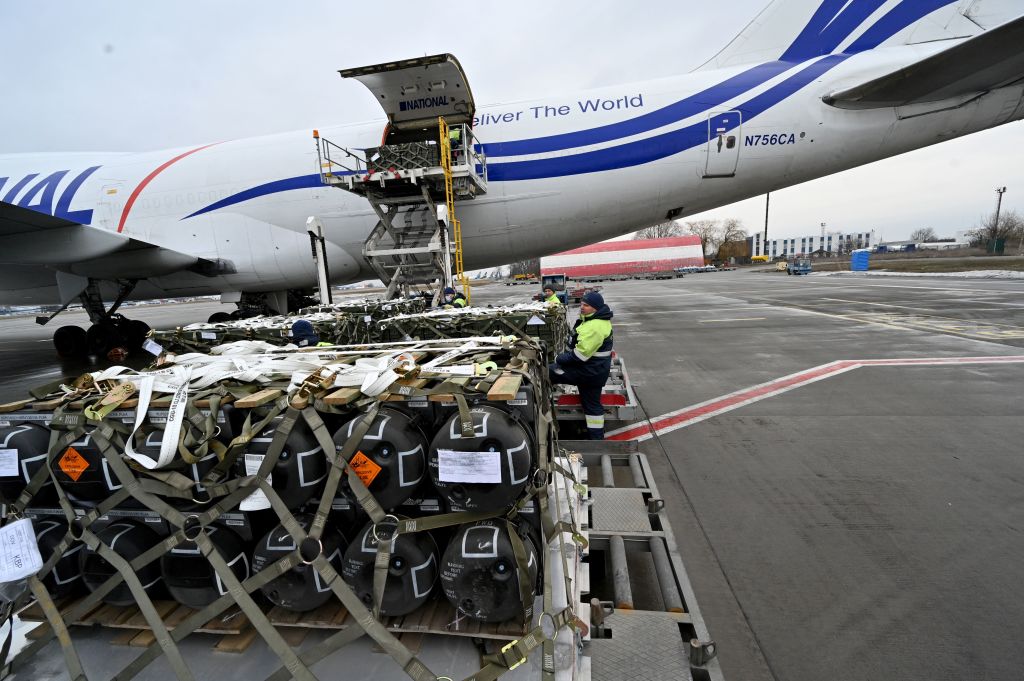 What the US is sending Ukraine

Mr Biden's announcement on Wednesday brings the total amount of US military aid pledged for Ukraine to $1bn in the past week alone - a huge acceleration when compared to the $2.7bn provided between 2014 and the start of 2022.

It is a "significant development" and addresses previous shortfalls, according to John Herbst, a former US ambassador in Kyiv.

"There's no question that [Biden] and his team have been too timid in providing support for Ukraine," Mr Herbst said. "And they have responded to that pressure."

What will this mean against Russian ground and air offensives?

Military experts say that the US-supplied anti-tank weapons are likely to have the most impact in Ukraine.

The invading Russian forces "are primarily mechanised forces" - meaning armoured convoys - so "the best thing you can do is take them [vehicles] out", said former US Army Colonel Christopher Mayer.

Ukraine has received a variety of anti-tank systems from several countries, which helps increase the "lethality" of Ukraine's forces against Russian vehicles, Mr Mayer said.

"If you give them a variety of anti-tank systems, it provides them with multiple opportunities to punch through whatever particular defensive armour protection systems that tank has," he said.

And while their claims can't be independently verified, Ukrainian officials say they are putting the weapons to good effect. As of 16 March, they claim to have destroyed more than 400 tanks and over 2,000 other Russian vehicles.

Anti-tank weapons, however, do nothing to help Ukraine combat Russia's air force, which for three weeks has been striking targets across the country.

The man-portable, shoulder-fired Stinger system is the only anti-aircraft weapon included in the US aid package.

The system has been seen in conflicts around the world since 1981. It was most famously used in Afghanistan, where US-supplied Stingers helped bring down hundreds of Russian aircraft and helicopters during the Soviet occupation.

It is effective against low-flying helicopters or aircraft at up to about 3,800m (12,400ft), making it relatively useless against higher-flying Russian bombers.

Mr Herbst said that the administration's mention of Stingers as part of the aid package to Ukraine is a "sign of weakness".

"They do need more Stingers, there's no doubt about that," he said. "But they need higher altitude anti-aircraft weapons as well…that's a serious omission."

What has the US not sent?

While the White House has hinted that higher-altitude weapons - such as the Soviet-era S-300 anti-aircraft missile - might be headed to Ukraine via third countries, no formal announcement has been made.

Officials in Slovakia have expressed a willingness to send the systems to Ukraine, provided they receive replacements. Two other Nato allies - Greece and Bulgaria - also reportedly have the systems.

The US has also dismissed proposals to have Poland transfer its Mig-29 fighter jets to Ukraine to allow them to do more to contest the skies.

US officials have described the plan as not "tenable" due to the increased risk of open conflict between Nato and Russia.

Mr Mayer, however, said that the transfer of Mig-29 or similar jets by US allies - with the administration's blessing - would be an effective way of helping Ukraine fight for control of its skies.

He noted that the Soviet Union provided both aircraft and pilots to North Vietnam to operate against US aircraft without starting a wider confrontation.

What have other countries done?

The US isn't alone in providing military aid to Ukraine. At least 30 other countries have provided help, including €500m ($551m) from the European Union, a historic first.

After the US announced the new assistance package, however, Ukrainian President Volodymyr Zelensky said that "more support" was urgently needed.

"Even more than we get now," he said, calling for "air defence systems, aircraft [and] enough lethal weapons and ammunition to stop the Russian occupiers".

Mr Mayer said he believes that the US weapon supplies pledged to date are perhaps only enough to allow the Ukrainians to "die heroically".

"We must be more aggressive about giving them what we have," he said. "We should at least give them the same quality, and quantity, of stuff as the Soviet Union gave to North Vietnam during our war with them."

Mr Herbst said that additional assistance packages will "probably" be needed in the future - and that they'll only be effective if they allow Ukraine to challenge Russia's air force.

"The key to me is whether or not we're sending something that hits Russian air assets at 30,000 feet or above," he said.

While no firm announcements have been made thus far, President Biden vowed that more help will be on the way - and that the US is working to help Ukraine acquire the longer-range air defence systems it needs, without providing details.

"More will be coming," he has said.